Skip to content
You are here
Home > Shmueli’s “Believe” CD 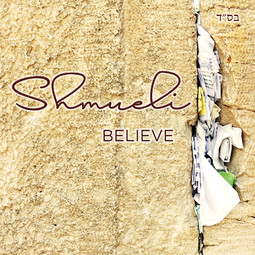 “Believe,” the new album by singer-songwriter Shmueli, arranged, orchestrated, and produced by John Sawoski, has just been released on iTunes and direct as a physical CD (recommended because of high-resolution orchestral recording and mastering at Capitol Mastering) directly from http://www.shmuelimusic.com/

Buy the album and take a wonderful musical journey listening to Shmueli’s incredible voice and beautiful songs. Accompanied by rich instrumentation (some of LA’s top studio musicians) with a classical yet modern sound, the strong feelings of the songs will bring a smile to your lips and a tear to the eye. Highlights from the album include several songs scored for full string section conducted by John Sawoski with touching violin solos by Mei Chang; a jazzy/hip-hop/big band song co-produced with Jon Mattox, featuring trumpets by Don Clarke, trombones by Gary Tole, and sax section and solo by Jay Mason; a new country style song with pedal steel solo by Doug Livingston and intricate piano accompaniment by John Sawoski; lots of great guitar playing by Tom Hynes, including searing electric and tender acoustic guitars as well as mandolin; great woodwind playing by Larry Hughes, Audrey Molinari, and SEA Flute; Latin and orchestral percussion by Valente Casas; commanding horn playing by Branden Cervantes; rocking and sensitive drums by Jon Mattox, additional nylon-string acoustic guitar by Kate Lewis; and much more. It’s all anchored by electric and upright bassist Tim Christensen. The album was tracked and mixed by Jon Mattox, with string section recorded by Damon Tedesco, and mastered by Ron McMaster at Capitol.

Favorites include:
“Va Haviosim” – like a rock opera with great string playing
“Al Naharos Bovel” (On the Rivers of Babylon) – an anthemic ballad with a touching solo by Mei Chang
“Just One Move” – a Hanukkah song based on the concept of “pay it forward”
“Believe” – which sends a message that “bad things happen to good people” but we must continue despite all of it

Shmueli’s language is song, straight from the heart, and through this vehicle everyone can access the energy, spirit, and direction which time-tested wisdom brings.